Compiled from Saint Andrew’s Church Deal – The Boatmen’s Church with the kind permission of the author Gregory Holyoake.

In the early part of the 19th century local churches were faced with a challenge. There were already two Anglican churches in the parish: the 12th century church of St Leonard at Upper Deal and its ‘chapel-of-ease’, St George’s in the lower part of town. St George’s Church, a handsome Queen Anne edifice that graces the High Street, had been constructed in 1716 for the sea-faring population.

By the beginning of the 19th century this ‘civic church’ of Deal began to be patronised by the fashionable gentry who contrasted strongly with the humble boatmen as they took their privileged places for Sunday services. Evidently, an alternative church was required to provide spiritual comfort for the bereft boatmen of the northern quarter. St George’s had been built for the port in its prosperity; St Andrew’s was built for the port in its decline.

In 1846 the Rector of Deal, the Reverend Archibald Hamilton Duthie canvassed support in the town for a new church, and he called a public meeting on 21st January 1847 to promote the new ‘Chapel of Ease’. A committee was formed from local clergy and boatmen, later joined by clergy from Eastry and St George’s Church. A subscription list was opened and illustrious personages who contributed included HM the Queen Dowager (who never forgot her warm welcome when she visited Deal in 1818 as Princess Adelaide), two Archbishops of Canterbury, the Earl of Guilford and the Earl of Clanwilliam. By far the greatest number of subscribers were clergymen or members of naval families in the district.

Ambrose Poynter of Westminster was appointed architect and Collyer and Son of Dover as builders. The original site chosen was in the High Street, but Mr Poynter declared the site unsuitable and a site was identified in the grounds of the defunct workhouse in West Street. It is interesting to note that the walls of the old workhouse remain while Beggars’ Alley, a straggling path bound by high brick walls, which once led to the workhouse, exists on the west side of the churchyard.

Meetings of the committee continued to be held at the Royal Hotel, Guildhall (now Town Hall) and National School (now St George’s Hall). Towards the end of 1848 a large proportion of the money had been raised and it was felt building would commence the following spring. Subscriptions continued to arrive and the antiquated system of ‘pew rents’ helped to boost funds as building got under way.

The opening ceremony took place at 11.30 am on 31st October 1850. The consecration was performed by the Archbishop of Canterbury, John Bird Sumner, and the former curate of St Leonard’s, the Reverend Martin Edgar Benson, was inducted as Vicar. At the time of consecration the church was a chapel-of-ease attached to the parish of St Leonard’s, but in April 1852 the area around the church was declared to be an ecclesiastical district. On 12th December 1867 the boundaries were confirmed when the parish of St Andrew’s came into being.

The area around where the church now stands was once market garden and much of the land was owned by Peter and Duke Hayman, who are commemorated in Peter Street and Duke Street.

By the early 19th century the land was used for housing for the Deal pilots who assisted vessels past the Goodwin Sands. Duke, Peter, Robert, Nelson and Middle Streets all had houses occupied by pilots.

Boatyards and hostelries also abounded in the area and the Deal Hoy Inn takes its name from the type of boat used to transport goods between shore and shipping in the Downs. Larger villas were erected in streets that took the names of saints: St David’s, St Patrick’s and St Andrew’s Roads. A special entrance to the churchyard was later created for the inhabitants of St Andrew’s Road.

The Register of Marriage is complete from 1852, and the first entry is for the marriage of Frederick Goodborn from North Sandy Lane (now Golf Road) and Sarah Steel of Duke Street.

The first Register of Baptisms, also started in 1852, is a fascinating document as it shows the diverse occupations of the inhabitants of the port. These include coachbuilder, sadler, victualler, confectioner, maltman, chimney-sweeper, basket maker, whitesmith, miller, pastry cook, bookbinder, brush maker, gasman, waterman, sawyer, hawker, servant and groom. The majority of occupations relied upon the sea, such as sail maker, rope maker, fisherman, sailor, steward, mariner, boat builder, shipping agent, coastguard, master of the pilot cutter and Chief Engineer for HMS Princess Royal.

Many of the familiar names of local boatmen appear with regularity: Atkins, Norris, Roberts, Erridge, Stanton and Pritchard (sample only).  Perhaps unsurprising in a maritime town there is a notable number of single women bringing their offspring to be baptised.

In 1865 the Reverend Martin Benson resolved to enlarge his church because of an increasing congregation.  The north aisle was extended to create ninety extra seats and the chancel was enlarged. A decorative cross on the church roof marks the original boundary of the nave. The total cost of these improvements was £850, raised by subscription.

In 1866 the Reverend Charles Shirley Woolmer was appointed as the new vicar, and in 1867 he raised funds for the demolition of the cramped vestry in order to extend the south chancel aisle, the removal of the organ from the north aisle into the new aisle and the conversion of the north chancel aisle into free seating. Dormer windows were inserted in the roof to increase light and increase ventilation. A spacious vestry was built with a linking corridor containing a new doorway on the north side of the church. These alterations provided fifty extra seats and cost £430, the church being reopened on 18th November.

Originally St Andrew’s contained no chapels. In 1891 the north aisle was altered to accommodate a small sanctuary known as the Memorial Chapel. It was dedicated to the memory of the Reverend James Benjamin Parker and “all worshippers departed in the faith of Christ”.  Later this became the Lady Chapel.

The first organ was built by James Eagles and placed on the north side of the chancel in 1857. It was originally planned to occupy an extension of the gallery over the present sacristy in the north aisle, and was later moved to the south aisle where dummy pipes shielded the organ from the view of the congregation. It cost £300 and was paid with private subscriptions.

The tower of the church holds a single bell 27 inches in diameter, weighing 4 cwt. and tuned to F#. It was cast in 1850 by the Whitechapel Bell Foundry. In 1910 the spire was restored through the generosity of the Reverend C.P. Banks.

St Andrew’s Church is surrounded by one acre of land. Formerly this was landscaped and a carriageway ran from the roadside to the front door. The original entrance was through a lantern-lit gateway in West Street, but later an opening was made in the boundary walls to allow access through St Andrew’s Road. The churchyard was consecrated for burials by the Archbishop of Canterbury on 14th April 1853. Tombstones have been moved to the south wall or arranged horizontally around trees although a few remain in situ by the west door.

In 1865 a house was purchased for a parsonage. Clarendon House stood at the corner or the High Street and Union Road (formerly Union Row – it led to the workhouse). This became the Rectory and possessed an onion shaped belvedere that gave spectacular views out to sea and over the Goodwin Sands. The upkeep of a grand house proved too much and it was abandoned in favour of Brooke House at no. 5 Cowper Road.  (Clarendon House fell into disrepair and was eventually demolished in 1964). In the meantime the present rectory was built. As this is in the north-west corner of the churchyard, an order needed to be signed by the Queen in Council for its construction. This rectory is the first to be built on consecrated ground since medieval times and its first occupants were Canon and Mrs. Lyonel Lancaster.

St Andrew’s acquired a Mission Church at the north end of Deal. This was built in 1883 and stood a little way along Sandown Road. Intended to accommodate 200 people, it had a mixture of pews and chairs, but there was room to process. Although this church stood in the centre of the boat building and fish curing industries it has to be admitted that the mariners, for whom it was intended, showed a lack of concern. Regular services were held on Sunday evenings and clergy of the district took turns to preach on special occasions.

During the First World War Deal Anglican churches made a concerted effort to cope with major crises locally. The churches had a keen social conscience and at the quarterly meetings frank discussions took place on subjects ranging from Religious Education to Music in Worship, Gambling, Birth Control and Cinematograph, Picture Postcards and the Child.

Lack of attendance at services in post war years was another matter for grave concern among the clergy and “the habit of motoring, the wireless, the servant problem, the custom of weekends in country houses and the playing of games on Sundays” were all given as excuses for diminishing congregations.

During the Second World War the east and west windows of St Andrew’s were carried off by a direct hit by a shell on an air raid shelter in Robert Street. The church was closed but an altar was set up in the parish room and regular services continued. In the face of war tribulations the local clergy saw an opportunity for home mission among the distressed and bereaved, American soldiers stationed in the district and returning Forces at the conclusion of the war.

On 6th December 1960 history was made at the time of the institution of Canon Lyonel Lancaster. It was the first duty performed by the Archbishop of Canterbury, Dr Geoffrey Fisher, after his visit to the Pope in Rome. His address to a full congregation at St Andrew’s attracted a great of attention from the press but this did not detract from the ceremony for Canon Lester.

In conclusion we should be reminded of the aspirations of the committee set up to promote the building of our boatmen’s church: “The committee looks forward to a future without fear, humbly trusting that the Great Head of the Church will incline the hearts of His servants to assist them with their bounty; and that, under His protection, they may still continue with success their endeavours to promote in the parish the knowledge of His truth and extension of His Kingdom”. 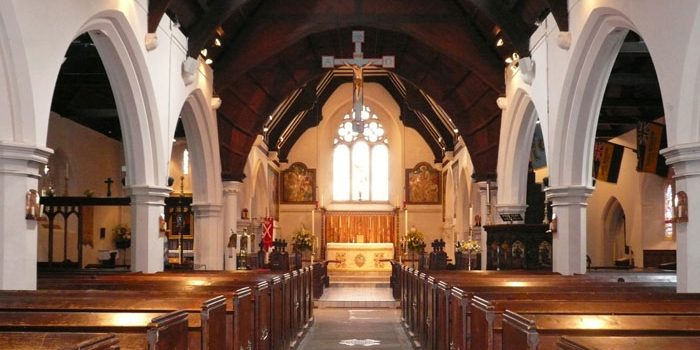 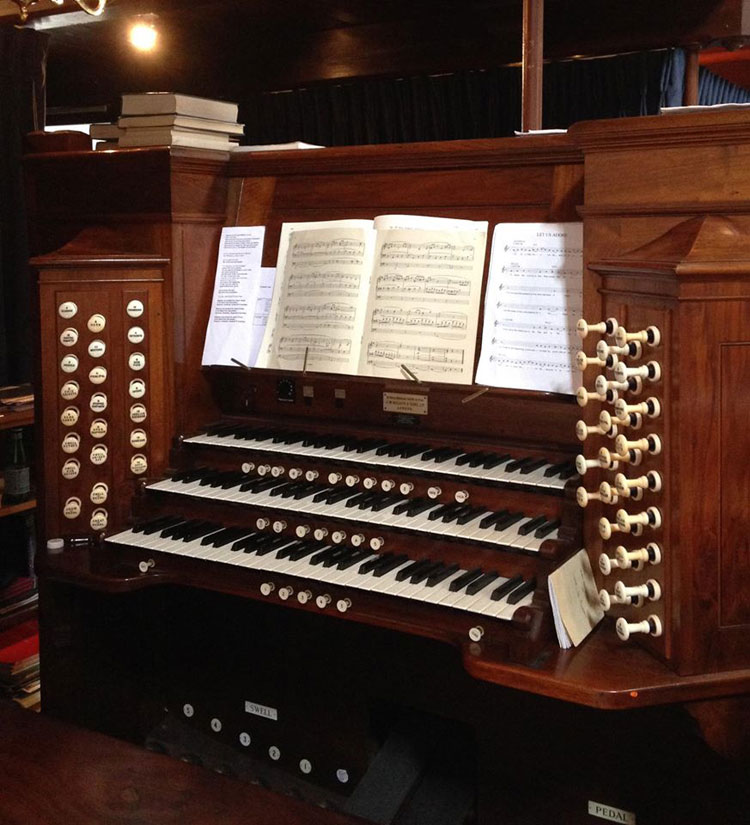 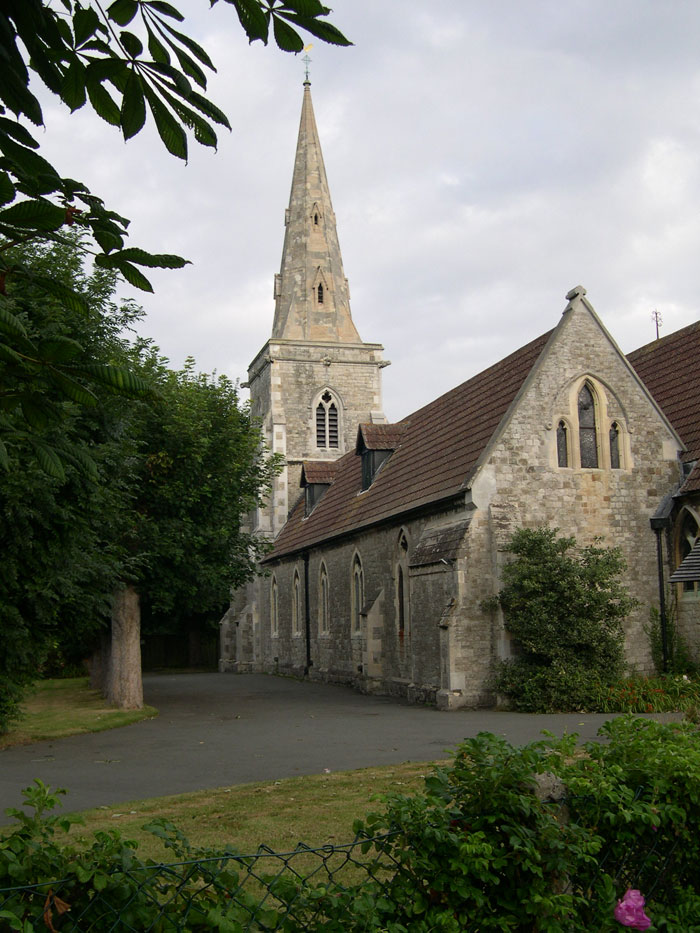 What’s on this week